Lorni Jarmie tried everything to get her Weimaraner Jax to stop licking himself. She tried drugs, diets, even clothing, but still Jax licked — and licked and licked and licked. He licked all day and through much of the night, and soon no one was getting much sleep.

Then one day, about two years ago, a desperate Jarmie did a Web search for dog coats and found K9 Top Coat.

The idea for Top Coat was born out of a certain desperation itself. Richard and June Lotz had two German shepherds and one toddler son. When the youngster came up with a mouthful of hair one day, they knew they had to do something. June Lotz had raised horses and was familiar with the Lycra coats used on show horses. Why not something similar for dogs? So, they went to work, snipping and stitching on the tabletop of their Talent home.

At first, they used the coat for their dogs only to keep the shedding under control. Then, one of their dogs injured itself, and they slipped on the coat to keep it from chewing at its stitches.

That’s when they realized they might just be on to something.

Today, they make 13 products, including a Comfort Coat introduced in February with antimicrobial and hypoallergenic materials made for dogs with allergies.

The coats have been a godsend for the Jarmies, who battled Jax’s skin problems for four years before happening on the web site.

The troubles started when Jax was about 3. The Jarmies had just moved to Powell Butte, where their 10 acres were perfect for a dog that loves to run. It was also thick with native plants including sage, juniper, fescue grass and yarrow, and soon Jarmie noticed Jax’s feet were red and raw, the hair chewed from his legs. At first, Jarmie thought it might be a food allergy. But special diets didn’t help. Then they took Jax on vacation to Arizona, and within two days, Jax was itch-free. But back home, he was at it again, licking and chewing until he was raw.

“Jax is my baby,” says Jarmie, whose two-legged children are grown and out of the house. “It just broke my heart to see him going through what was obvious discomfort.”

Jarmie’s veterinarian suggested she try over-the-counter allergy medicine, but Jarmie doesn’t like the way the drugs make her feel, so who could say if Jax would like it any better. Next, the vet prescribed Prednisone.

“It made him crazy,” recalls Jarmie. “He didn’t go to sleep. He kept jumping up and down. He paced the house. His eyes were dilated. I only gave him that pill twice, and we stopped right away.”

Next, she tried making sleeves to cover his legs, but the sleeves fell off. T-shirts didn’t work, either, so, she turned to the Web.

“The search came up with K9 Top Coat, and it was exactly what I wanted.”

A study at Oregon State University indicated that behaviors associated with itching, such as scratching, biting, rubbing and licking, decreased in duration, frequency and intensity in dogs wearing the coats. However, Lotz said the study was too small to prove definitively that the coat works better than other treatments.

The coat works on two levels, Lotz says. It protects the animal from exposure to what is irritating it, and it also breaks the itch/scratch cycle.

“When you break the cycle, the dog itches less,” says Lotz. “Some people need the coat (for their animal) for two hours a day, some for 20 hours. It all depends on the severity. Some still need to take allergy medications. We’re not going to say this is a cure; it isn’t. It’s symptom relief.”

“It makes a big difference in people’s lives,” Lotz says. “They can sleep now. And it’s really helping the dogs.”

That’s not to say, however, that the dogs necessarily appreciate it. As happy as the Jarmie’s are with the coat, Jax is decidedly less so, admits Jarmie.

Jax tolerates the coat, but, “he stills doesn’t like it,” she says. “I don’t know why. He’ll come out of the bedroom and kind of look around the corner to see if I have the suit in my hand. It almost like he’s embarrassed.” 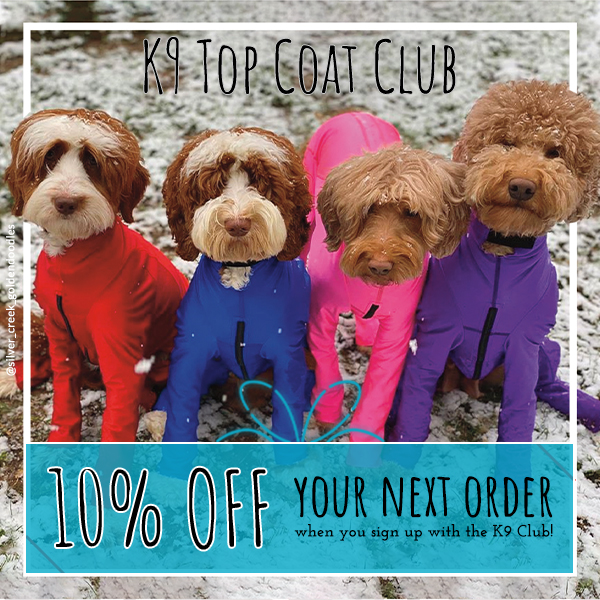